Put 30 Stadiums in Your Park

Air Chamber Facilities, Inc. is a company that markets a small facility to non-coastal college and professional baseball teams. The facilities, which are pressurized similarly to an airplane fuselage, are custom designed to retrofit within existing batting cage and other off-field locations.

The most difficult thing about college and professional baseball is being consistent while hitting during transitional baseball. That is; when players transition from places such as Denver, Atlanta, Arizona, Florida, Texas, Chicago and even Kansas City to the west coast or the east coast of the U.S., they must suffer the difficulties of hitting extra movement on the fastball. This can take several games and leave a player open to failure and confidence issues, creating slumps. The only way to expose oneself to additional movement on a fastball is to travel from the interior states to the coastal states for live hitting. Until now! Our facility can duplicate the coastal states' pitch movement, exactly! And, we gauge it precisely!

The purpose of the unit is to provide non-coastal teams a method of leveling the playing field against those teams that are located in traditional "pitcher's parks" where there is more movement on pitches due to heavier air resistance. See "Sortable Stats" on the sister website www.baseballvmi.com.

In all of baseball, the four-seam fastball is the most used pitch. In MLB, the hitters get a safe hit against that pitch at a rate of 1 hit in every 11 strikes seen, or just under 9 percent. Whether at home or on the road, those same hitters get a hit on 1 in every 9 strikes seen when they have recently played games in more dense air. * See

figure below. However, whether at home or on the road, those same hitters only achieve a hit on 1 in every 13 four-seam fastball strikes thrown. This is when they have not recently been exposed to the heavy air available at sea level.

All the other pitch-types show a similar differential. Below is a compilation of over 1 million 800 thousand pitches in MLB of the four-seam fastball and the result within varied air density conditions since 2014, courtesy of www.baseballvmi.com If the team recently exposed to a greater air density than today’s game continually gets more hits, then over the years, the team that is recently exposed to a lesser air density than today’s game provides, that MLB, College or community baseball or fastpitch softball team will eventually give up, as many colleges have already done.

Note: The yellow arrow outside the left hand column identifies teams that have left their home stadium at sea level in cooler conditions to play their first game at a ballpark at about 1,000 feet elevation in warmer conditions. The yellow arrow outside the right hand column identifies the first game played where a team from about 1,000 feet elevation travels from warm conditions there, to a cold sea level venue. Second and third games from the extremes will also fit these categories.

Example of space where facility can be located
under stadium seating 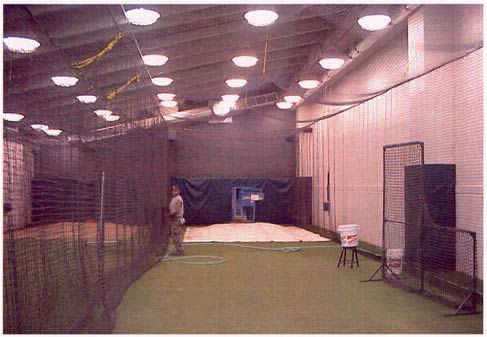 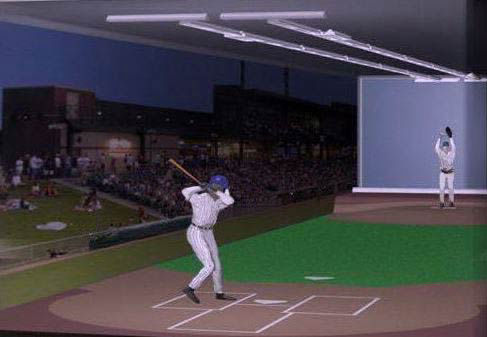 Both pitchers and hitters benefit